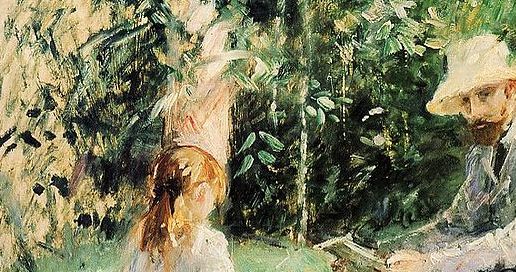 An upward draft
catches Mama’s hem
at Forty-first & Twelfth
raising it in waves
around her knees
over her thighs
a pink-striped dress
dances like the awning
at Lida’s Cantina
when a man at the corner
clutching a boy’s hand
sees Mama naked
under her flying skirt
& I see he sees
wondering why
she doesn’t
hold it down
& he sees
me see him
winking
before the light
turns green.

Two of each—cup, saucer, bread plate—
in lukewarm water, I wash away

thirty years of dust since Mother died.
At 42, uterine cancer like Queen Mary

bloody Mary quite contrary.
Why did you run away?

I thought I could find you by traveling
to Chicago, Barbados and Edinburgh.

Against the sun, I raise this porcelain
eyeing it for chips and cracks. Bone china

fired from bone ash like Mother’s gray powder
handed me in a bronze urn.

Or is this songbird cup glazed in blue
mere clay? My lips where once were yours.

My father built biceps working for US Steel
smelting iron in heat that humbled men.

Now I could break his arm
over my knee, brittle as kindling.

till I flew from his shoulders. They began to sag
after my mother passed. Rising at night, no moon out,

tossed him down. He speaks of my mother
rubbing his back with eucalyptus oil and saves hair

from her brush, strands he wraps in kleenex.
At night with his whiskey, facing Jeopardy, my father

drifts off to Kargasok.
In the Russian mountains women live to be 105.

Like a canopy of darkness
they shadow the ground for miles
on currents that lift them
back to their roosts.

sit wing to wing
till morning branches cracked
under their weight.
At daybreak

did they leave the oaks
bare?

He says we never saw them abandon
the hollow, catch a new wind
to an unharvested south
but often would see their return

black streaks
on a September afternoon.

I do not skulk from God.
He has no eye for me
only for my father—tall and brown
hands that raise me over his head.

their backs slowly before burning them.
He forces the camel to sit on the cold earth,
head down, and gives father a white flint knife.
Slice the thorax, He bellows.

Father turns away—not a butcher.
The camel lives two hours. My father crawls
inside the camel’s skin and closes it over him.
Flesh still warm. 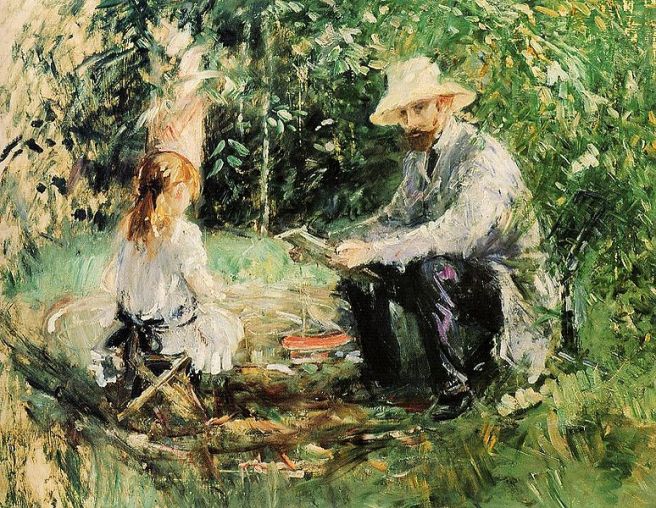 Chella Courington is a writer and teacher. With a Ph.D. in American and British Literature and an MFA in Poetry, she is the author of six poetry and three flash fiction chapbooks. Her poetry appears in numerous anthologies and journals including Spillway, Gargoyle, Pirene’s Fountain, and The Los Angeles Review. Originally from the Appalachian South, Courington lives in California with another writer and two cats. For more information: chellacourington.net.

Painting, Eugene Manet and his daughter in the Garden, by Berthe Morisot.

We believed this landscape would not betray,
cinematic sunsets haloing white
farmhouse and cornstalks, as tall as young
men, your cats running free across the road
and back without daylight danger, always
returning home before coyote hour,
high winds that cause old branches to grumble,
the haunted oak tree breaking your bedroom
window, its veined hands reaching for your throat
only to discover that you had fled
to the basement, your nerves frayed, uneasy
at the ribbons of rain that wrapped around
every stone or brick within your line
of sight. I tell you that the wilderness
reclaimed Ukrainian suburbia
after the Chernobyl meltdown, pregnant
foxes and winter wolves roam without fear,
that genetically modified soybean
exhibits natural immunities
to radioactive dirt, that thunder
heads and tornadoes have become common
topics of conversation, that I know
how to hide arsenic poisoning from
the forensic detectives in Osage,
MO but would be indicted in New
Orleans for the same crime. Beige homes destroy
our last corner of beauty and I am
leaving for the smoky mountains, this last
sanctuary now coated with poor-grade
cement, the once gentle road a gauntlet
for domesticated mammals, wild skunks,
afternoons of relaxation removed
with top soil. I tell you I am waiting
for the next disaster as I hold my
grandson’s blooming hand, guiding him around
an abandoned porch in a sweet circle
of splintered flight, that I no longer trust
meteorologists, pretty prophets
with ugly news, I scan the horizon
searching for God’s eyes, a voice louder than
schoolyard gunfire, a promise that this
caterpillar boy will wake tomorrow.

Beth Gordon is a poet, mother and grandmother, currently landlocked in St. Louis, MO. Her poems have been published in numerous journals including Into the Void, Noble/Gas, Five:2:One, SWWIM, Verity La, Califragile, Pretty Owl Poetry and Yes Poetry. She is the author of the chapbook, Morning Walk with Dead Possum, Breakfast and Parallel Universe, published by Animal Heart Press. She is also Poetry Editor of Gone Lawn.