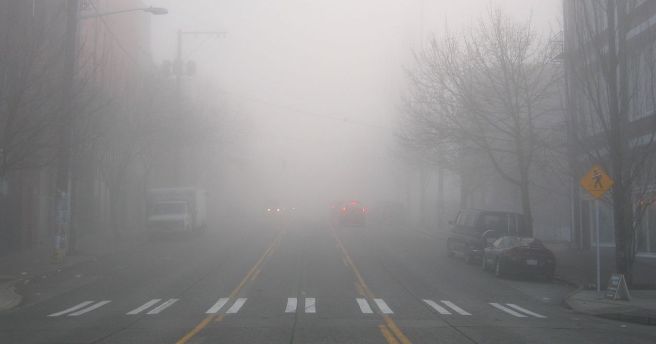 Fog.
Fog the thief that steals the future’s far wheel.
Fog that blurs the houses four eyes.
Fog that curdles the center of memory.
Fog that corrodes the spine of the helix.
Fog that drowns the crow’s kin calls.
Fog that shipwrecks the end of the block.
Fog that soups the boulevard rancid.
Fog that blades the lamplights circle.
Fog that swallows the market’s straw basket.
Fog that cataracts my lover’s eyes.
Fog that swirls the church into swamp.
Fog that snaps the thumbs of the newborn.
Fog that stains the moon’s first promise.
Fog that fractures the guitar strings.
Fog that forces the counting of limbs.
Fog that cancels the wedding vow’s kiss.
Fog that blots the shooting star’s silver.
Fog that choke- holds the vocal cords’ morning.
Fog that buries its head in cement.
Fog that erases the tombstone’s name.
Fog that carries your sister away.
Fog that hides the ancient skeleton key.
Fog that demands a storm replace eyesight.
Fog that closes the world at dawn.
Fog that grasps for gold without sun..
Fog.
Fog
so thick
no border can hold it.

Marcus Colasurdo is the author of twelve books, including the underground classic, Angel City Taxi. He’s a community activist on both east and west coasts and points in between. As a writer for page and stage, He is the founder of Urban Mobile Artists (Los Angeles) and Gimme Shelter Productions (Baltimore); non-profit organizations of artists whose performances benefit community groups such as homeless shelters, feeding programs, after school projects, literacy programs. Colasurdo is  founder of Soul Kitchens (free community meal and clothing programs) in Baltimore, Maryland and Hazleton, Pennsylvania, which have provided deep-rooted nourishment and soul unity for thousands of folks over the last decade. His latest book, Heart X-Rays (co-authored with G.H. Mosson), is available at PM PRESS, Oakland, California.