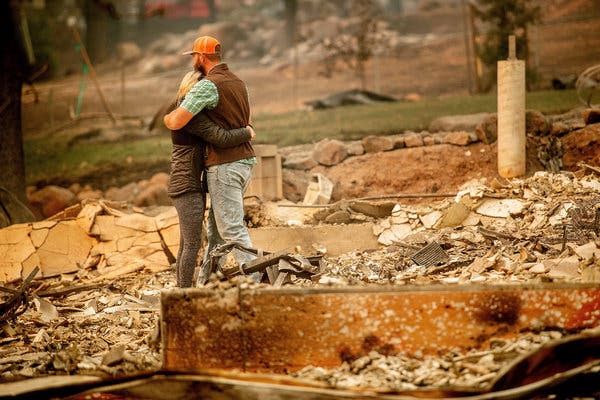 And far back, fires. I tried to number them,
to give each one its own significance –
a huge event, a movie come to life,
each one a shot of communal adrenaline,
the emptying streets converging on a smoke
too black for chimneys, air’s breath-sucking heat,
a billowing, the spit of punched-out windows
and once, an oily blob of dragon’s phlegm,
a sun escaping from a cinema screen,
and grown-ups scattering like playground kids.
A visitation, talked about for weeks
in child-speak or the hushed tones of bereavement.

And then we were too old. We understood.
I knew that rumbling sound was rooms collapsing,
I’ve felt, not heard, it since too many times –
something internal tumbles floor by floor
and though you’re whole, you know yourself a shell.
It’s details now. The hush, the helplessness:
a woman sleepwalking along the footpath,
her neighbours linking arms to keep her back,
their faces grim with fear. Her strength; she moved
like a machine, her eyes fixed on a point
no one could see.

Today I couldn’t tell
which house it was, that row all of a piece.
Memory’s a town; expansion and neglect,
a gutting out, a scouring of the acrid,
a crowding at the heart; sometimes a stillness
waiting for decay to be complete.

Ted McCarthy is a poet and translator living in Clones, Ireland. His work has appeared in magazines in Ireland, the UK, Germany, the USA, Canada and Australia. He has had two collections published, ‘November Wedding’, and ‘Beverly Downs’.
His work can be found on http://www.tedmccarthyspoetry.weebly.com

Editor’s Note: As we process the images and experiences of the Camp Fire, we have noted that many among us were already living the effects of their “own personal Camp Fire,” which made them homeless, marginal, or at risk before the disaster. Thus, we include this offering from the UK on metaphorical “fires” in our lives, to recognize that disasters, collective and individual, continue and demand much of us.