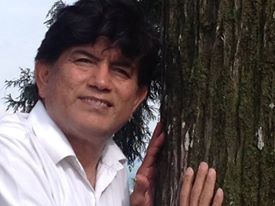 In the local tea shop,
my regular haunt

to write fresh poems
each morning in Kathmandu,

I pull a page
out of my sheaf of papers

to let her read what I’ve been
working on since morning.

She looks at it for a second,
then almost uninterested

as if she has made a mistake
twitches her nose

turning the page
with my Corona poem

as a protection wall
to sneeze behind and return

the sullied page
as a fitting token of appreciation

from some cranky critic.

Half the year, he travels and reads all over the world and conducts Creative Writing workshops at various universities in North America and Europe but goes trekking in the Himalayas when back home. Currently, Yuyutsu Sharma is a visiting poet at Columbia University and edits, Pratik: A Quarterly Magazine of Contemporary Writing.