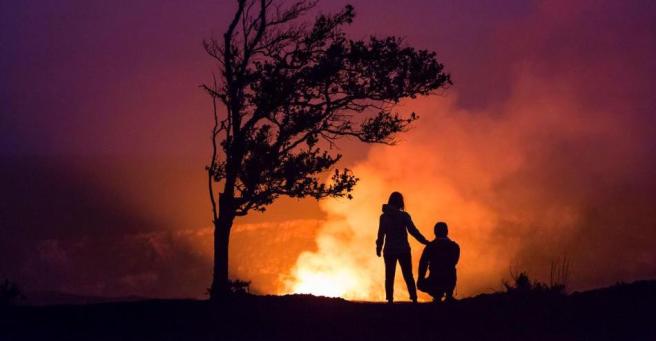 This is one of those nights you never dream,
The sky not on fire, but burning.
Falling ash and ember. An orange cantaloupe moon. Nosebleeds. Diarrhea.

The volcano dome collapses, a sudden cloud, and night is hyphenated.
A rain of black ash
And all of the stars drop from sight in bundles.

The people come out of their homes and stand on their verandas,
A people of the long knife and volcanic dust,
Skin hard with ash, hair ash-poisoned, ash sweat stew.

Spirits roam the roads and pathways, find life in the old ones,
The village’s simple center crowded into the hill,
Welcomes the voices of the dead.

Later island rescue comes with breathing masks,
A church opens its doors early to pray for rain,
Goats come from their hiding places to shake themselves free.

All day dust clouds landscape and window.
The mountain sacrifices itself to lahars and spirit people.
Everything, every leaf, every iguana, every ghost wrapped in ash.

Michael H. Brownstein is on the roof of his old house, the roof in serious disrepair, and he walks on it as if he’s on a boardwalk – a squirrel falls through where he just stood – what is left to do but go to all fours, tread carefully until he’s on safe ground, call the roofers (he can’t fix this), and write a poem.

He’s walking across a great field, firecrackers exploding. He swats away at dozens of mosquitoes. Near where he teaches, the security guard tackles him and points out a sniper who has been shooting at him as he crossed. There is nothing else to do but conduct a poetry workshop in his algebra class.

He goes camping, and a rattlesnake crawls into his sleeping bag. Prayer and poetry – they really do go together.

On and on. Take a break. Write a poem.

One thought on “#Mountains: Reign of Ash by Michael H. Brownstein”